The reaper is a very mobile class that utilizes its chain blades not only to damage, but also absorb health and whip across the battlefield. Many fluid chain skills and efficient powerlinks make the Reaper class a force to be reckoned with, sticking to bosses and maintaining high damage output. The purpose of this guide is to help new and experienced Reapers further optimize their rotations. 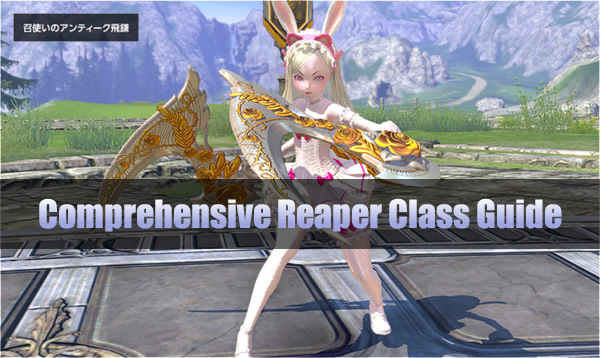 For weapon stats, you're after a combination of pure damage stats and crit rate or utility via cooldown reduction. On the older gear sets like Gen, the Intense option is by far the best in terms of base stats. Even on the newer gear it's best to emulate this.

If you have a base rollable stat, your valid options are:

Pure damage far outclasses the crit rate here, but attack speed trumps both due to its strength combined with skills such as Reaping.

Again pure damage rolls are by far the most important to aim for here. Both crit rate and cdr are fine options, but they are mostly beaten out by pure damage. However, if you have high atk spd, or Gen/Lucid and have the extra roll, I would strongly suggest rolling cdr as a priority.

In general, defensive stats are not so important for DPS classes (just look at the stats I've been using, ptheh), but it's still worth putting effort into getting a good set of stats on your chest. Most important though, is getting the right class stat if you have the option.

If you have the class stat available, you're only after:

Honestly I can't remember what the other options are, point is they're not better than this in PvE, and by far the most important thing to do with your chest is get this stat.

- 6.9% reduced damage when knocked down

Flat out damage reduction is the best you can do with these rolls, and you ideally want stats that aren't situational, so the frontal and kd reduction options have a little less value. I included the HP restoration stat not because it's good, but simply because I like it, and given Reapers hit tonnes, if you have a 4th roll, it's actually totally viable.

Gloves are probably the simplest piece to roll, because the stats you're after are basically the same no matter your class - for DPS that is. Reapers used to not benefit too much from attack speed, but those days are over thanks to recent changes.

My gear still has an old MP restoration stat from when too much attack speed would give you gaps in your rotation, ignore that. The stats listed above are the only ones you want, it's well worth spending the money making sure you've got them exactly right.

Like with the chest, defensive stats are not so important for DPS, so the boots are not particularly important. It's worth noting though that boots do have semi-offensive stats available on them with movement speed and MP regen allowing increased efficiency in your play.

In PvE, these are the only stats that do anything for you, so everything else is practically useless. Balance is a null stat, and the CC resistances do nothing either.

You have two choices on your belt, assuming you have two rollable stats. Option one is going full crit, which I would personally advocate. Option two is rolling both crit and power, which is equally solid.

So the stats you're after are:

You always want the 6 crit roll, it's your choice for the second one. Choose based on what you get first or what is best based on your other stats.

Be careful when you cancel your skill animations, some skills are good to cancel early, others will whiff if you're not alert.

If you have both a quickcarve and empowered brooch, you can use one before entering combat, and equip the other to be ready immediately once combat starts.

Shrouded Escape is an emergency iframe.

Don't panic if you need healing, it's easier for a healer to heal you if you stay still than if you run around like a maniac.

Learn ranges and casting speed for all your skills so you don't animation lock yourself inside a dangerous attack.

Know when you can get hit, there's no need to iframe everything if it's not going to hurt much, better to keep DPS-ing.

Always make sure Sundering is off cooldown when you cast Shadow Reaping.

If you need to iframe multiple times in quick succession, prioritise using Retribution between Shadow Steps to save cooldown.

Consider Pendulum Strike as much a positioning skill as a DPS skill.

Back damage is key to success as any DPS, prioritise positioning over continuing your rotation.

Try not to cast anything between Cable Step and Shadow Burst as it will consume the attack speed buff, even consumables will utilise it (like you need to cast them quicker).

Cable Step won't put you in combat, more like a gimmick but hey.

With enough cooldown reduction you can perma-stun inside Reaping by casting Smite and Cable Step on cooldown.

Let your tank aggro a boss first before starting DPS, especially if you're going to start with Reaping, having a well positioned boss is vital, and pulling aggro is not going to help.

If your tank is struggling, either don't use Reaping at all, or pair it with Shrouded Escape to drop aggro.

Learn what Retribution can/cannot block, e.g. Yana's mid and Darkan's dust, but not the dragons ranged attacks in Timescape.

Always prioritise Shadow Lash when your MP is lacking, especially since you can use it inbetween your other skills easily, don't neglect it.

If you Retribution an attack while casting Shadow Lash, you can cancel the movement of the counter by continuing to cast Shadow Lash, this will however immediately end the chain, so your dps will suffer.

Sundering's long animation lock can be cancelled with Shadow Step, Death Spiral, Cable Step and Pendulum Strike, do this!

Remember Pendulum Strike can move you through certain bosses very effectively, if you get used to this it can vastly improve your efficiency as a Reaper.

Looking for a better way to get tera gold? U4GM provides you with a trustworthy Real Money Trading platform where you can quickly buying tera gold that you want without any delays or risks involved.